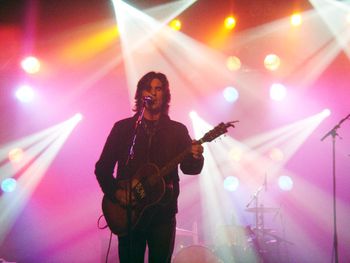 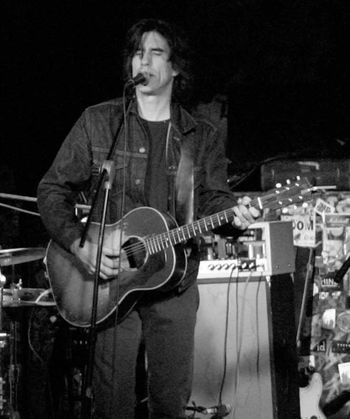 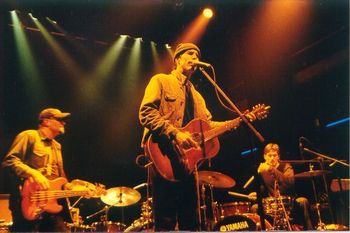 with The Silos in Bilbao 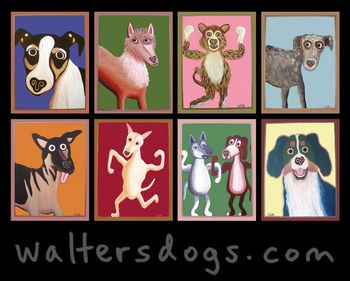 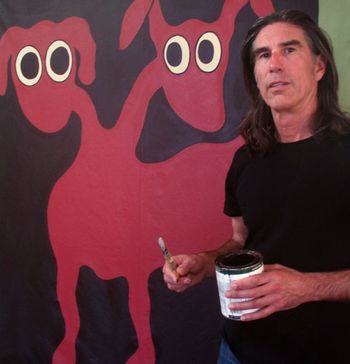 in his Flagstaff studio 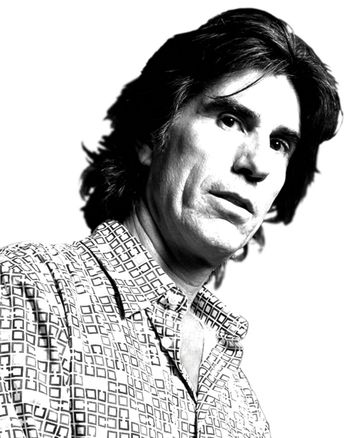 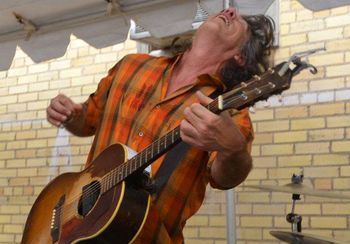 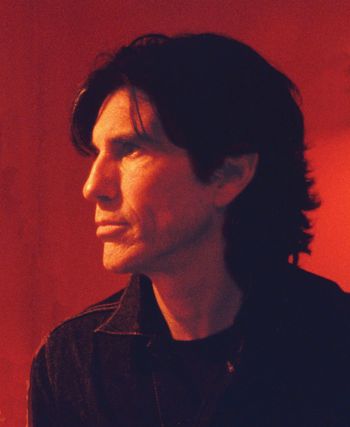 in the East Village 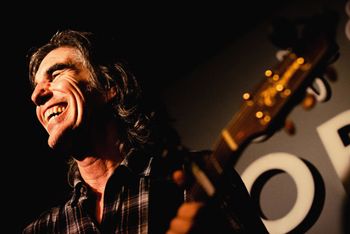 A Cuban-American whose parents fled Castro’s Havana with him still in the womb, Walter Salas-Humara was raised bilingual just across the Florida Straits in Fort Lauderdale. College at University of Florida in Gainesville and a residency with the Vulgar Boatmen left him with a lifelong habit of Mudcrutch/Tom Petty-style crunchy guitar riffs. Chasing the punk prairie fire to New York just in time to sift through the ashes, he formed The Silos in 1985 with guitarist Bob Rupe and violinist Mary Rowell, plugging the main cable of American rock idiom into the jerry-rigged soundboard of Velvets-era feral experimentalism. The unlikely result, as evidenced by About Her Steps (1986), the seminal Cuba (1987) and their RCA debut The Silos (i.e., The One with the Bird on the Cover, 1990) was a loose-limbed conceptual country-rock that in turn influenced (if not outright inspired) the alt-country No Depression movement just around the corner. The band was voted Best New American Band in Rolling Stone Magazine's Critics' Poll of 1987 and appeared on Late Night with David Letterman in 1990.

With this apocalyptic agrarianism safely encoded in his band's name, Salas-Humara moved on once that lineup had run its course -- taking with him not the country revisionism that by now could have sustained him in an endless holding pattern, but rather the Lower East Side’s fervid avant-gardism, that high-test mixture of aggression and dissonance the neighborhood wears like a jailhouse tattoo. He forged connections in Austin, another lost outpost tailor-made for his particular set of influences, where he formed the poor man’s supergroup the Setters with songwriters Michael Hall of the Wild Seeds and Alejandro Escovedo of the True Believers. Moving to Los Angeles, he recorded and toured with Tom Freund, Manny Verzosa, Jon Dee Graham, Gary Sunshine and Darren Hess. Those middle records – Hasta la Victoria! (1992), Susan Across the Ocean (1994), Heater (and its remixed mutant twin Cooler) (1998) validated the early acclaim and expanded Salas-Humara’s reputation as one of the finest songwriters working in the American vernacular. In 1998, Salas-Humara moved back to New York and formed Silos 3.0, with Konrad Meissner on drums and Drew Glackin on bass and guitar.

Throughout the new millennium, the Silos have continued to release an admirable body of work. Laser Beam Next Door (2001) and Come on Like the Fast Lane (2007) are fierce power trio albums that burst with the crackling intensity of proto-punk legends the Velvet Underground and Television. When the Telephone Rings (2004) and
Florizona (2011) are intricately crafted productions, densely layered with glittering detail. With the passing of Drew Glackin in 2008, and the addition of Rod Hohl (bass and guitars), Bruce Martin (keyboards) and Jason Victor (guitar), the band has entered a new phase. Walter Salas-Humara and Silos present and past have marshaled the best of America -- our wide tradition, focused innovation and unfettered optimism. Embrace them as a national treasure.

2014 brought the release of a new Walter Salas-Humara solo album, Curve and Shake. Rolling Stone editor Anthony DeCurtis describes the album - “That sense of being untethered from certainties, of floating, permeates Curve and Shake. The feeling is gentle, not quite scary, but with an element of unease.  Letting go of expectations combines aspects of sadness, freedom and even wonder. Like so many great singers, Walter communicates as much by what he doesn’t say as by what he does. His raspy tone provides a rich counterpoint to the genial surrealism, the offhand magical realism, of so many of his lyrics. His words are presented as if they’re describing straightforward events, but they speak a rich, associative poetry that evokes emotions more so than facts. His guitar playing is similarly adaptable – raw and stinging one moment, dreamy and droning the next.

2016 brought the release of 2 albums. Work: Part One, an acoustic rendering of Walter's best songs written in the 80s, is the first in a series of acoustic albums defining Walter as a singer/songwriter. It is produced by guitarist extraordinaire Richard Brotherton and includes familiar Silos Mary Rowell on violin and Amy Allison on supporting voice. Explodes and Disappears is an album of new songs, the follow up to Curve and Shake. Walter sings witty songs about modern life, rocks a sweet Spanish melody on guitar, swings a sexy jazz number, and then reaches deep for a soulful expression of values in a troubled world. He tops it all with a funky number chronicling 3 American misfits searching for peace of mind and headed for disaster on the shores of Mexico -- all skillfully blended into a seamless flow.

2017 has seen the release of Work: Part Two, the continuation of the acoustic series produced by Rich Brotherton, and the new studio album WALTERIO was released in 2019 on Rhyme and Reason Records and he, solo and with band, is currently on a global touring schedule supporting this excellent album. The space-time of Salas-Humara is not a Technicolor world, or a green screen world of hyped fakery, it’s a workaday world, paced as such, in which home and heart are the iconography of inspiration, played with pluck and gravelly insight. Or, as Salas-Humara suggests, “One’s environment and one’s experiences always informs one’s songwriting. This happens naturally whether you like it or not. Songs are life, and my life has been just one very long song.”

Having first moved to New York in 1982 to pursue a career in the visual arts, and having completed a year of graduate work at the Pratt Institute in Brooklyn, Salas-Humara found steady work with the Leo Castelli Gallery during the ‘80s Manhattan art boom. Citing as his heroes ‘50s minimalist painter Ellsworth Kelly and Pop artist Jasper Johns, Salas-Humara’s early paintings were primarily large abstract color fields. His art career was cut short with the success of the Silos three years later.

In the early 2000s, Salas-Humara took up painting again after a hiatus of two decades. On a whim, he created several stylized, cartoon-like dog paintings as holiday gifts for his nieces and nephews. They became so popular that he was soon spending much of his free time painting commissioned dog portraits in his signature style for friends and fans. In 2005, he formed a company called WaltersDogs and began producing originals and prints for sale at shows, by mail-order and in music-oriented art galleries like Yard Dog in Austin, eventually expanding his product line to include apparel, accessories, bedding and stationery products.

I create paintings that combine qualities of the abstract art I like with fun imagery that anybody can relate to, even kids,” he says. His dog paintings can be seen on the walls of Elisabeth Moss’s apartment in the 2010 Universal Pictures comedy Get Him to the Greek.

In 2018 Walter began to make complex symbolic images of Horses which have been shown in Galleries and Art Centers throughout the USA.